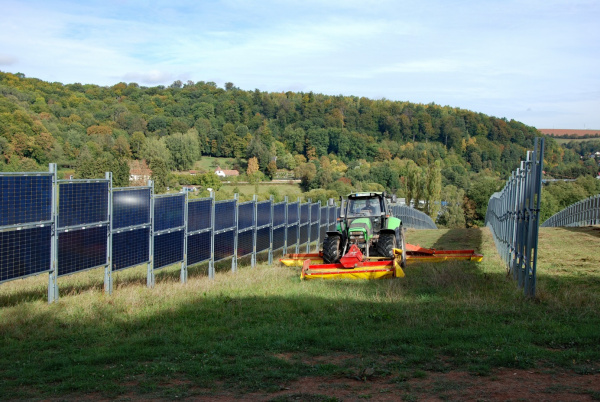 The state government has set itself the target of further expanding the percentage of green electricity consumed in Saarland beyond the 20 percent mark already achieved in 2020.

To address the issue of a lack of space for installing photovoltaic plants, the Ministry for Economic Affairs, Labour, Energy and Transport convened a roundtable for photovoltaic systems on agrarian land. Headed by Dept. F/1 (Fundamental Issues in Energy and Climate Policy) within the Ministry for Economic Affairs, Labour, Energy and Transport, other members of this roundtable included the Farmers Association, the Chamber of Agriculture, project planners from the photovoltaic industry, citizen energy cooperatives, state planning (Ministry for Internal Affairs, Construction and Sport) and experts working in conservation and agriculture (Ministry for the Environment and Consumer Protection). Dept. F/1 (State Monuments Office) from the Ministry for Education and Culture also attended sessions in an advisory role

A basic agreement was achieved by roundtable members, whereby an ordinance as recommended by the Saarland Energy Council was to be created at state level corresponding to the option set out in the German Renewable Energy Sources Act for utilising agrarian land in disadvantaged areas for ground-mounted photovoltaic arrays. In accordance with the terminology used in section 3(7) of the Renewable Energy Sources Act, ‘disadvantaged areas’ are understood to mean areas as defined by Council Directive 86/465/EEC of 14 July 1986 concerning the Community list of less-favoured farming areas within the meaning of Directive 75/268/EEC (OJ L 273 of 24/09/1986, p. 1), as amended by Commission Decision 97/172/EC (OJ L 72 of 13/03/1997, p. 1). The decision-making process was complemented by a consultation involving public-sector agencies, some of whose requests for changes were taken into account when designating suitable areas or were referred for a final decision to local government authorities.

Since that date, contracts for the 100 MW peak of capacity named in the ordinance have been awarded via the German Federal Network Agency tendering process. Accordingly, an amendment ordinance was required: this allows for an additional 250 MW peak and is valid until 31 December 2025. Changes have also been made to the designated areas: the further removal of priority areas has lessened their total area from 8,300 ha to 7,470 ha.

The amendment ordinance was adopted by the Saarland state government on 2 March 2021.